These Monologues for Kids are Sure to Impress the Judges

You are here: Home / General / These Monologues for Kids are Sure to Impress the Judges 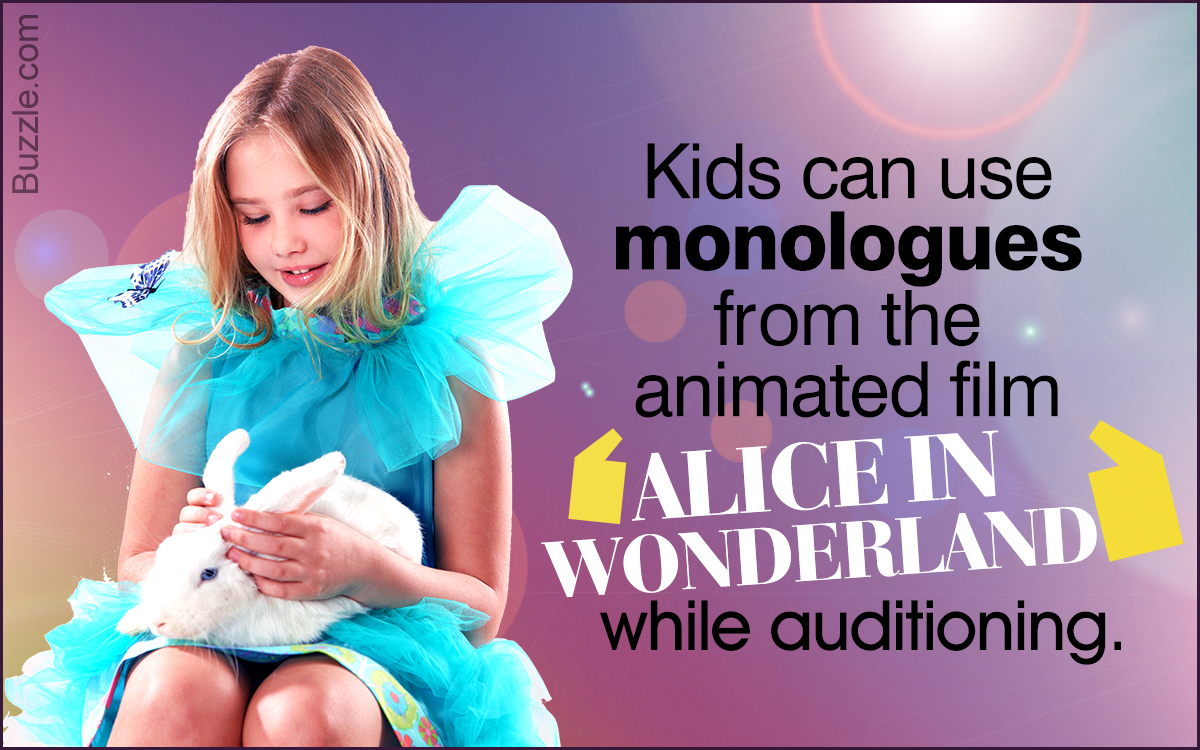 When it comes to selecting monologues for kids, they should be short, crisp, and have to be delivered in the right manner. Monologues lasting for not more than a minute are often preferred during auditioning.

Monologues are not only for entertainment purpose. Teachers can also use these monologues as a means of educating children on a variety of subjects. They can make their classroom session more engaging by discussing these monologues. Thus, with monologues, learning can be fun and interactive. Some of them are given below:

This monologue is taken from the movie ‘Avatar‘ that was released in 2009.

Situation: The protagonist, Corporal Jake Sully has just become the leader of the Naive tribe, the inhabitants of the Pandora planet. The planet has been captured by the humans and so in order to motivate and boost the morale of the natives of Pandora, Jake Sully says the following:

The Sky People have sent us a message… that they can take whatever they want. That no one can stop them. Well, we will send them a message. You ride out as fast as the wind can carry you. You tell the other clans to come. Tell them Toruk Macto calls to them! You fly now, with me! My brothers! Sisters! And we will show the Sky People… that they cannot take whatever they want! And that this… this is our land!

This monologue is taken from the film ‘Alice in Wonderland’ released in 1995.

Situation: Alice is looking for the white rabbit in the wonderland. On the way, she encounters Cheshire Cat who tells her to meet Mad Hatter.

Oh by the way, if you’d really like to know he went that way. … The white rabbit. … He did what? … Who did? … What rabbit? … Can you stand on your head? However if I were looking for a white rabbit, I’d ask the Mad Hatter … or there’s the March Hare in that direction. … Of course, he’s mad too. … Oh you can’t help that, most everyone’s mad here. … Ha ha ha. You may have noticed that I’m not all there myself.

This monologue is taken from the animated film ‘A Boy Named Charlie Brown’ released in 1969.

Situation: The protagonist of the film, Charlie, a school-going boy has just lost a national spelling competition. He is dejected and feel miserable. His friend Linus tries to console him by saying that the world didn’t come to an end. The last statement made by Linus has a deeper meaning. It suggests to stop dwelling over the loss and that he (Charlie) is capable enough to win the competition in the next attempt.

Well, I can understand how you feel. You worked hard, studying for the spelling bee, and I suppose you feel you let everyone down, and you made a fool of yourself and everything. But did you notice something, Charlie Brown?… The world didn’t come to an end.

Situation: Two fish Marlin and Dory are looking for Nemo, who has been caught by scuba divers and taken to an aquarium, located in Sydney. Nemo is the son of the male fish, Marlin. Both Dory and Marlin after many adventures finally reach the place. At the same time, the owner of the aquarium is about to gift Nemo to his niece. In an attempt to prevent the owner’s niece from accepting this gift, Nemo acts as if he is dead. Marlin, who has just entered the aquarium is aghast to see his son dead. Angry and frustrated, Marlin tells Dory to leave him. This is how Dory reacts to Marlin.

No. No, you can’t. …STOP! Please don’t go away. Please? No one’s ever stuck with me for so long before. And if you leave…if you leave… I just, I remember things better with you! I do, look! P. Sherman, forty-two…forty-two… I remember it, I do. It’s there, I know it is, because when I look at you, I can feel it. And…and I look at you, and I…and I’m home! Please…I don’t want that to go away. I don’t want to forget.

The monologue is taken from the animated film ‘Ratatouille‘ that was released in 2007.

Situation: Remy, a young rat, is taking every effort to become an expert chef. The interview of his role model chef Auguste Gusteau is being telecasted on a TV channel. After watching the show, Remy discovers his new found sense of taste and reacts in the following way:

Gusteau (speaking to a TV channel): How can I describe it? Good food is like music you can taste, color you can smell. There is excellence all around you. You need only be aware to stop and savor it.

Remy: (Taking a morsel of cheese and a strawberry at the same time) Ah! Gusteau was right. Oh, mmm, yeah. Amazing. Each flavor was totally unique. But combine one flavor with another and something new was created…

Later, he tell his brother the secret of adding a smoky flavor to a dish. It is really too amusing to read his reaction after he tastes that food.

The key is to keep turning it to get the smoky flavor niiice You gotta taste this! This is… oh, it’s got this kind of… mmm, it’s burny, it’s melty… it’s not really a smoky taste. It’s kind of like a certain… Pshah! It’s got like this ” Ba-boom! Zap!” kind of taste. Dont you think? What would you call that flavor? … Yeah! It’s lightningy! We gotta do that again! Okay, when the next storm comes, we’ll go up on the roof… I know what this needs! Saffron. A little saffron would make this!

This monologue is taken from the movie ‘The Goonies’ released in 1985.

Situation: A group of friends are exploring a seaside restaurant that is supposedly the location of a hidden treasure. One of the friends, Lawrence Chunk gets caught red-handed by the owners of the restaurant, the Fratellis. They are extremely angry to see Chunk trespassing their property. In reply to their questions, Chunk says the following:

Everything. Okay! I’ll talk! In third grade, I cheated on my history exam. In fourth grade, I stole my uncle Max’s toupee and I glued it on my face when I played Moses in my Hebrew School play. In fifth grade, I knocked my sister Edie down the stairs and I blamed it on the dog. When my mom sent me to the summer camp for fat kids and then they served lunch I got nuts and I pigged out and they kicked me out. But the worst thing I ever done, I mixed a pot of fake puke at home and then I went to this movie theater, hid the puke in my jacket, climbed up to the balcony and then, then, I made a noise like this: hua-hua-hua-huaaaaah and then I dumped it over the side, all over the people in the audience. And then, this was horrible, all the people started getting sick and throwing up all over each other. I never felt so bad in my entire life.

This monologue is taken from the movie ‘How the Grinch Stole Christmas‘ that was released in 2000.

Situation: Grinch, the antagonist of the film, who does not like to celebrate Christmas, is invited by the natives of Whoville city to be a part of festive celebration. The following monologue shows Grinch self-arguing on whether to attend the party.

The monologue is taken from the animated film ‘Alice in Wonderland’ that was released in 1951.

Situation: Alice is in wonderland and meets Mad Hatter and March Hare (the two fictitious characters in the film) enjoying a party. Upon asking the reason for celebration, Mad Hatter gives the following reply:

I shall elucidate. Now statistics prove, prove that you’ve one birthday. … Ahh, but there are three hundred and sixty four unbirthdays. … What a small this world is. … Now blow the candle out my dear and make your wish come true. … A very merry unbirthday to you!

On the whole, monologues for kids create a positive impact on the listener, only when they are supported by appropriate gestures and facial expression. Saying monologues with a poker face will not create any impact on the audience. No matter, how interesting the monologue is, if the facial expressions are not synchronized with what you are saying, don’t expect any appreciation from the audience. So, both parents and kids need to understand that facial movements are also very important to make the audition a success.